DO NOT update Nvidia drivers to version 496!

Kryptex is distributing $550,000 as a compensation for the brief periods of instability which occurred in January and February.

What is Bitcoin halving? How will halving affect the mining profitability, and how will the prices perform? Should you invest or wait until better times? Kryptex dives into the details.

In a nutshell. What is Bitcoin halving?

First, we'll glance over the most important topics regarding halving, and then we'll dive into the details.

How will halving affect bitcoin price?

Price will most probably continue to grow, as it did before.

It's hard to be certain, but the experience of last halving events tells us that bitcoin price will grow steadily for at least a year after the halving event. Here is how the price performed after the previous two halving events:

You can clearly see it on this chart: 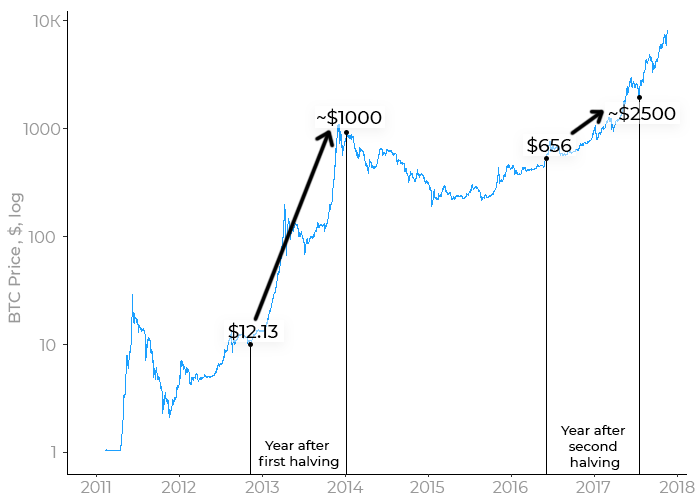 Sure, two halving events are not enough to form a concrete prediction. But previous experience tells us — bitcoin will continue the climb up. Miners and traders around the world express optimistic forecasts, meaning that media buzz will also stimulate growth.

How will halving affect Kryptex profitability?

Kryptex profitability will not be affected by Bitcoin halving.

Kryptex mines altcoins, not bitcoin, which means mining profitability does not depend on bitcoin price or bitcoin block reward.

What will happen to bitcoin savings?

Halving will not affect savings in bitcoin.

Only the block reward gets cut in half. Bitcoins accumulated on the wallets will stay intact.
If bitcoin price is affected by halving, it will affect your dollar (or other currency) balance value in turn, be it dollars, euros, or any other. Bitcoin balance, though, will remain unchanged.

We've glanced over the basics

Now let's dive into the details and discuss a Bitcoin economy — we'll consider different halving scenarios and check out the expert's opinions.

Let's get into it!

Bitcoin halving decreases the Bitcoin block reward in half. The amount of bitcoins issued is limited to 21 million. Halving happens every 210 thousand blocks and is a fundamental principle implemented to control currency emission and inflation.

To control inflation, central banks buy and sell securities from the reserves. It works through control of money supply: emission and withdrawal of money from circulation. The efficiency of these measures fails in the long run, tho. Compare a 1920s dollar with 2020s — the 1920s one costs 13 times more than the present one. It's called inflation. Good or bad, most cryptocurrencies work differently: they are different by design and are meant to be independent of external governance. All the restrictions and rules are implemented in the code, making each crypto coin a predictable currency.

Halving is the main difference between a fiat currency (dollar, euro, etc.) and cryptocurrency. It makes Bitcoin a deflationary currency, meaning its value grows over time.

Crypto is often compared to gold, which supply is also finite. Every next kilogram of ore is harder and harder to mine. This provides gold with the ability to retain its value and remain a great store of value for thousands of years. The same is true for crypto.

Is this the first halving in history?

No, the upcoming halving is the third one. First two halving events happened quite early in the bitcoin lifespan, making them hard to remember. First miners earned a whopping 50 BTC for each block. Than 25 BTC, after the first halving on November 28, 2012; then 12.5 BTC 4 years after that. 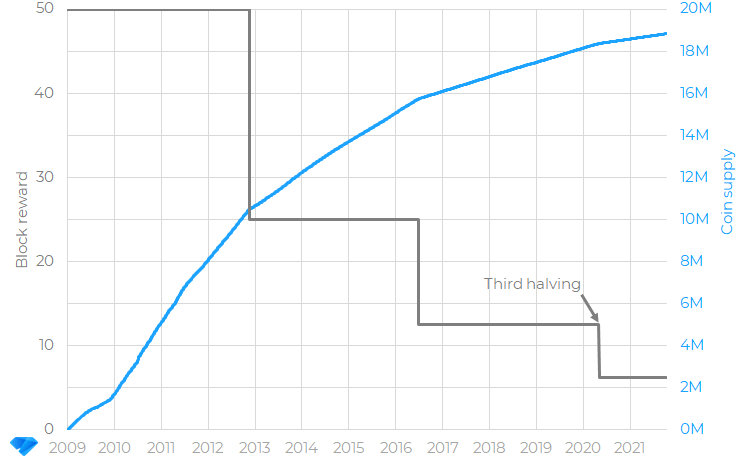 Bitcoin reward will decrease to 6.25 BTC per block in the middle of May 2020

Bitcoin emission will finish after 32 halvings in total. Although 87% of total bitcoin mass has already been mined, only in the year 2140 we'll witness the last bitcoin block mined, all due to halving principle.

Public uncertainty around the halving attracts a lot of media attention. Nobody is sure if halving will make bitcoin grow or decline, so people speculate about it a lot.

We've created a chart showing bitcoin price history and plotted last two halving events along with the upcoming third one: 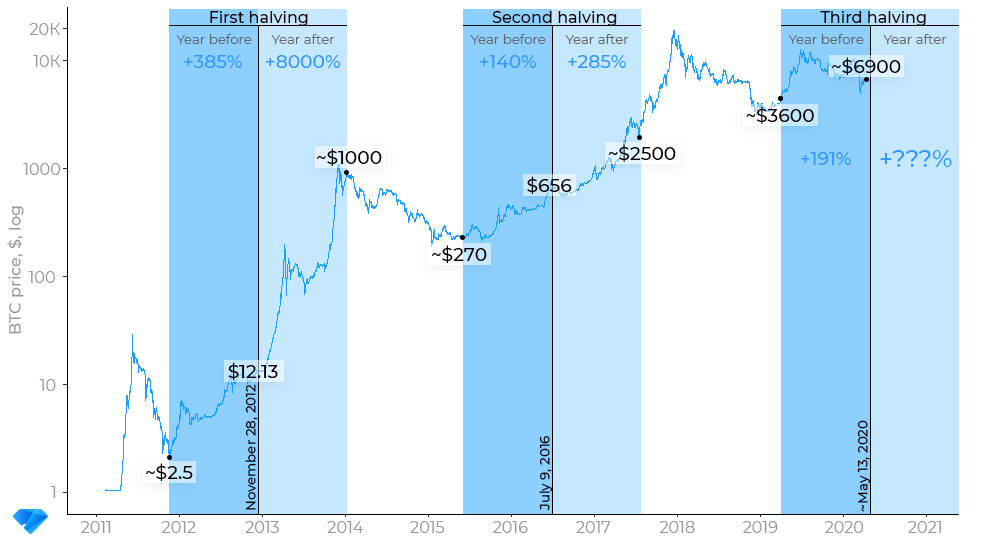 For the year before, the first halving bitcoin showed little growth, increasing only four times in its price, which is not a whole lot, considering it was a very young currency. But for the year after that, it blasted to the moon from a mere $12 up to a whopping $1000!
Second halving wasn't so radical in its manner but still showed a steady increase. Sure, both post-halving years were accompanied by strong volatility and speculations, but an overall trend was still a positive one.

Third halving might follow the same path. Or may not. Two halving events do not provide enough experience to be certain. Cryptomarket has changed: new legislative tools were designed, bitcoin mining got more centralized, and the supply volume has decreased (more than 80% of coins have already been mined). Bitcoin gets more and more widely adopted, which in turn makes it a much stable currency almost entirely decoupled from the general stock market.

Different opinions on the matter

Again, there is no right or wrong opinion. Profitability, prices, altcoin rates — it all might grow up or down. We also can't ignore the fact that it all might just not change at all. We've compiled the most common post-halving scenarios, including the ones we've discussed in this article already:

Halving — is a lovely thing. It is a property that makes Bitcoin such a strong currency which it is today. Bitcoin is no longer "that senseless fuss for amateur traders and speculators." 2020 crisis showed — while all the stocks and currencies crashed down, Bitcoin has gone up against all the odds. Cryptocurrencies have decoupled from a common stock market. They are now all by themselves.

Got any questions? We are here to help

Ask us about halving, how to build a perfect mining rig, or suggest feature ideas. 😉